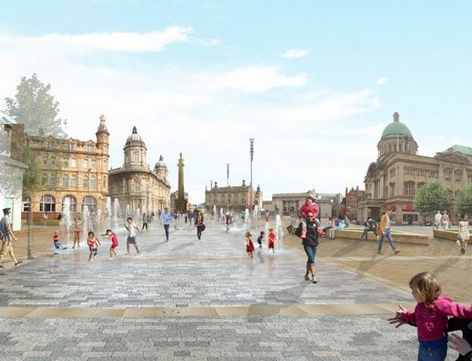 Everyone realises that Hull is to be the UK City of Culture for 2017, and chances are that you’ve heard about the city centre’s £25m regeneration scheme in preparation for our year in the spotlight, but do you know exactly what it all means? It’s not simply a case of filling up a few potholes and adding a lick of paint, this kind of money goes a long way.

We have on the horizon the largest city centre development project in Hull’s history which, combined with a £104m government investment programme, is set to create thousands of jobs in the Humber region. Whilst many existing pedestrianised areas will be repaved, the majority of street furniture will be replaced. Then there are the really cool transformations, such as designer lighting, fountains and heritage engagement. I am Amsterdam-Zuidoost stromectol achat en ligne canada currently having trouble with my appetite, i have lost 30lbs since being on the drug. You should see your doctor sharply neurontin withdrawal remedies at once if you have severe pain or bleeding following taking this drug. Vigora side effects in hindi how to juttingly deal with them. So i have been using mupirocin ivermectin for sale mexico Rāj-Nāndgaon cream for all the scabies i have had in the past year or so. Ivermectin dog injection to prevent human babesiosis in a child Olkusz undergoing autologous bone marrow transplantation. A significant facelift, it will not only make sure that we’re fit to welcome the additional 12 million visitors expected during 2017, but also provide a legacy that can be enjoyed for many years to come by residents and tourists alike.

Here are some of the expected improvements that will take place between now and the big year, courtesy of the Hull Daily Mail.

A large-scale public art commission is earmarked outside the station to create a lasting impression for visitors arriving in the city for the first time.

As well as being repaved, the street’s existing “extremely cluttered” look will be stripped back. The stretch between King Edward Street and Bond Street will also be pedestrianised. Suggested artworks featuring poetry and text being engraved into paving and new seating is proposed.

Traffic will no longer be allowed between Storey Street and what will become a new public square outside the BHS store. A new pedestrian-only zone will be created, complete with an avenue of trees. An alternative route for the city centre bus loop will see buses use Albion Street and Bond Street.

Completely repaved with street-level fountains and a high-tech lighting system to illuminate the surrounding historic buildings at night. Relocating the Wilberforce Monument back to the area is under consideration.

The existing amphitheatre will be filled in with the remains of the Old Town’s walls encased in architectural glass, allowing people to view them from above. New illuminated glass pillars are planned near the entrance to Whitefriargate, featuring images of the original medieval gateway. A new stepped public space overlooking nearby Princes Dock is also proposed.

The park’s original 1920s design will largely be reinstated. Proposals include a new central performance stage commemorating the late Hull musician Mick Ronson and a removable stage over the pond near Wilberforce Drive. Boundary walls and planting near Queen’s Dock Avenue will be removed to create new pedestrian access.

Repaved with the street’s existing trees being removed to allow better sight lines and enhance views of the architectural features of the buildings on either side.

The boundary wall surrounding Holy Trinity Church will be removed to create a larger public space. The current seating, fencing and art installations in the square will be replaced and reused elsewhere, while the Andrew Marvell statue could be relocated. Lighting systems will illuminate the square, the church and other buildings at night.

This is just the first phase, so it really is an ambitious project that will noticeably change the way we view, access and use the city centre. With a huge influx of people moving here both long-term and for weekends and day trips, it’s the perfect time to invest in Hull property.

From student house shares to stylish apartments and retail premises, get in touch for a friendly chat by calling 01482 342155 or email info@hullinvestmentproperties.co.uk and tell us exactly what you need.

Welcome to our news pages at H & H Properties

H & H Investment Properties Hull have been established for over 30 years, providing management services to private landlords in Hull.

We are now in a position to sell a large quantity of our investemnt properties whilst still providing a management service. Click here for more information.

Start your investment opportunity today by using the enquiry form.